Barcelona wants to buy Cristiano Ronaldo. The president of the Blaugranas insists on the transfer

Home » Barcelona wants to buy Cristiano Ronaldo. The president of the Blaugranas insists on the transfer
Betting News

Barcelona can make a transfer that seemed incredible at first glance. The Catalan super club is showing interest in Juventus and Portugal striker Cristiano Ronaldo. 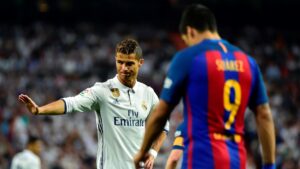 According to the Spanish edition AS, the president of the Catalan club Joan Laporta is personally interested in the transfer of the Portuguese. It is reported that the functionary has long dreamed of bringing Lionel Messi and Cristiano Ronaldo to Barcelona.

Cristiano Ronaldo is a pupil of Sporting. During his career, he played for Manchester United, Real Madrid and Juventus. Ronaldo joined the Turin camp in the summer of 2018 from Real Madrid. The “Los Merengues” paid €117 million for the Portuguese.

In the season that ended, Cristiano became the top scorer in Serie A, scoring 29 goals in 33 matches. The 36-year-old Portuguese has a year left before the expiration of his contract with Juventus. The Transfermarkt portal estimates the five-time Ballon d’Or winner at €45 million.