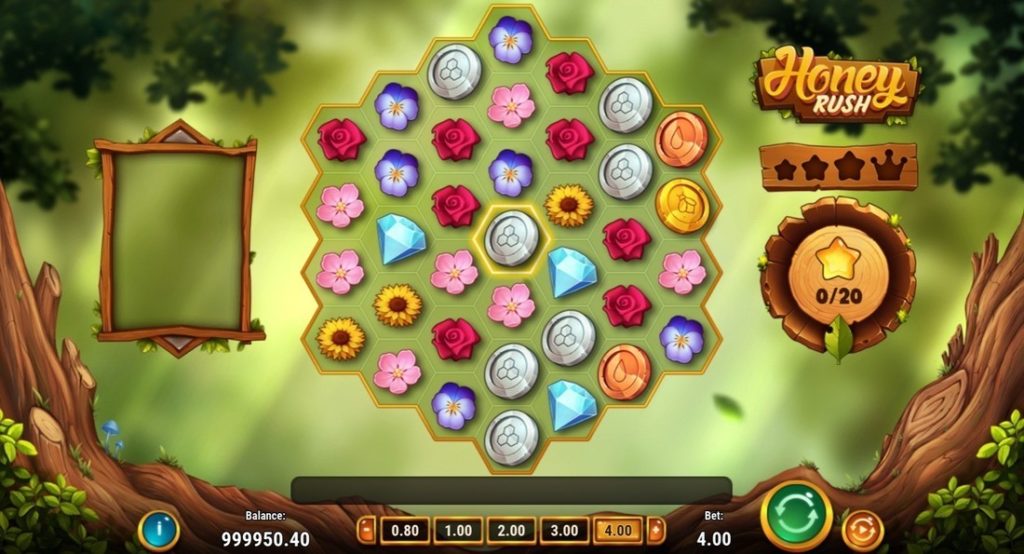 This slot has no rotating reels and active lines for combinations, so it’s even difficult to call it a gaming machine.

The field consists of numerous hexagonal cells lined up like a honeycomb. In each round, new pictures fill them.

Paid chains are made in the style of clusters. At least five identical icons should be located next to each other, touching any edges. There can be several such sequences in one round.

Winnings are calculated based on the odds provided for each of the combinations available in the game. The second parameter is the current bid.

As soon as the payment is credited, the icons from all such chains disappear. Empty cells are filled with the characters located above the field. If combinations are formed again, the process continues. All winnings fill the counter located on the right of the screen.

There is no doubling game. 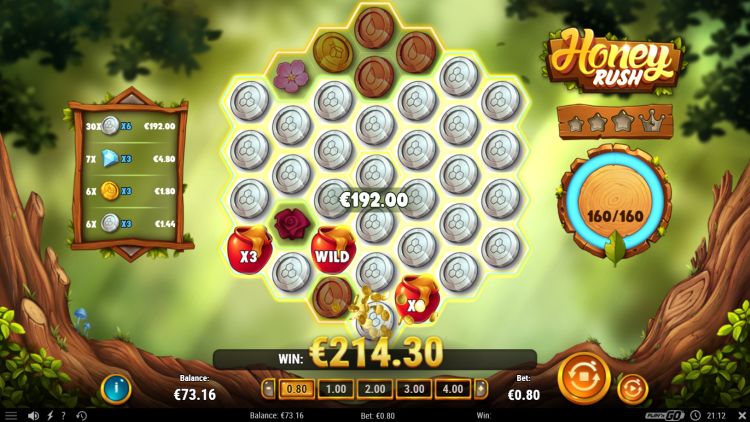 The Honey Rush return to player of 96.5%, along with the high volatility makes this slot quite a lucrative one. The big wins might not come in very often, but the Honey Rush RTP ensures that when they do, they come in quite high.

When a user opens a game, a splash screen first appears. Three pages show the features of the slot. It can be turned off so that it is not shown in the future.

The main part of the screen is the playing field. On the right is the Rush Meter, and on the left is a scoreboard that lists the combinations that have developed during the current round.

The control panel consists of the following subsections:

To select a bet amount, click on the button with the required amount.

At the bottom there is another panel with information windows, help and settings.

You can adjust the speed of the process, sound options, automatic mode limits, window size and other parameters. You do not need to download Honey Rush. 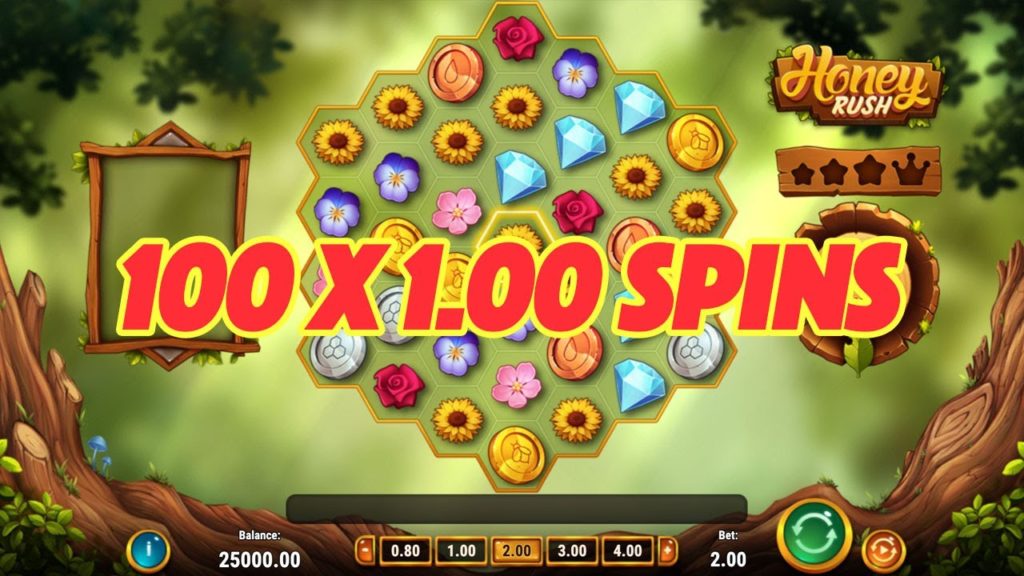 Let’s discuss the prize features of the Honey Rush slot:

Any paid sequence fills the Rush Meter counter scale. Each involved character advances it one point. There are four steps:

In the first three stages, the Drone Colony bonus is activated. Also on the screen is added one Sticky Wild. At the fourth level, the Queen Colony prize feature begins. 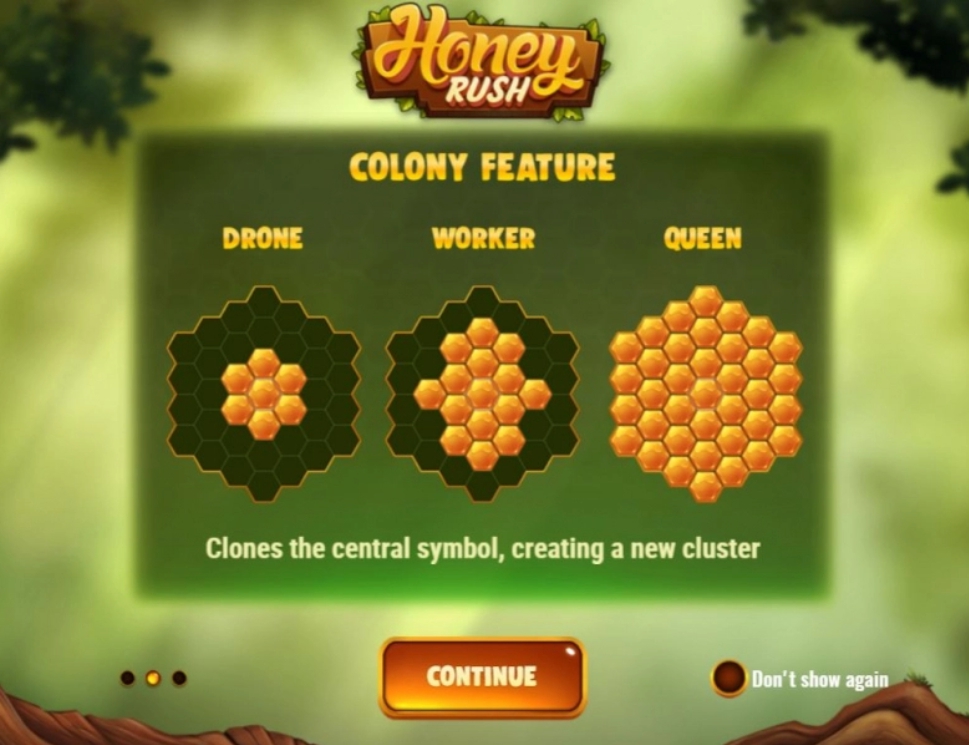 Consider the features of the Colony Feature. It consists of the following options:

There are no accumulative Play’n GO jackpots in the Honey Fever gaming machine. The maximum win can be 9000 bets.

The Honey Rush mobile gaming machine is a type of slot designed for smartphones. Its interface is slightly different from the desktop, but the rules and other features remain unchanged. 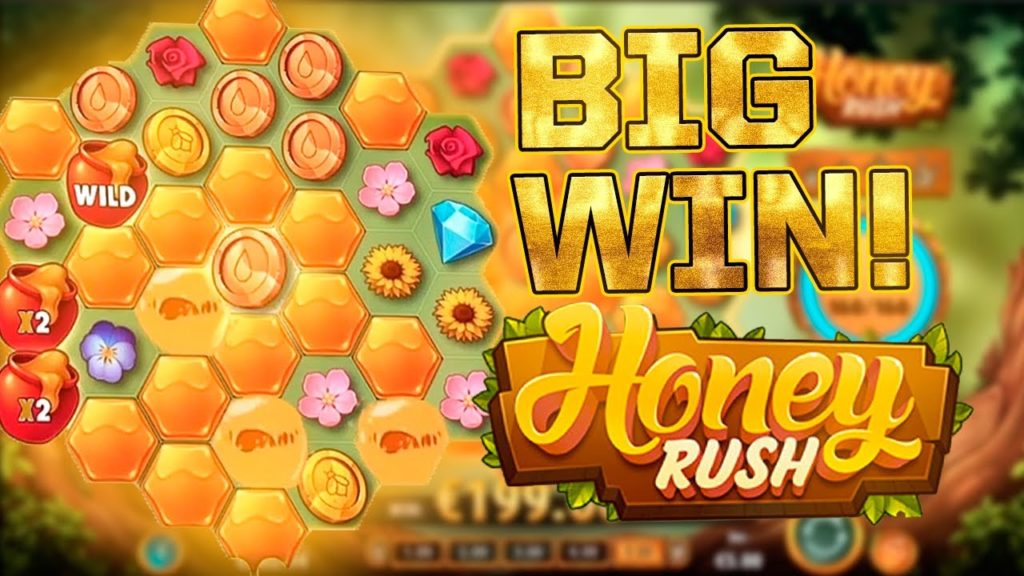 Play’n GO has previously released several gambling games in which the playing field consists of numerous cells, and combinations are formed on the basis of clusters. On the developer’s site, similar models are denoted by the term grid slot.

In the fall of 2019, the famous studio introduced another device operating on the same principle. This is a Honey Rush slot machine dedicated to bees and honey. 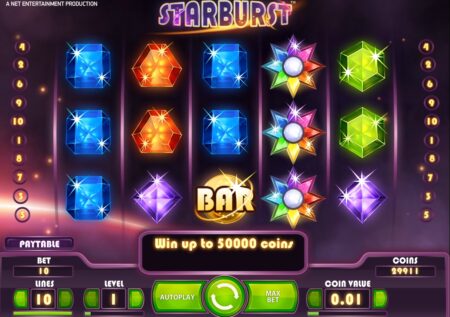 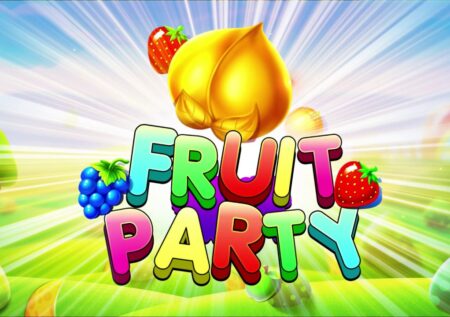 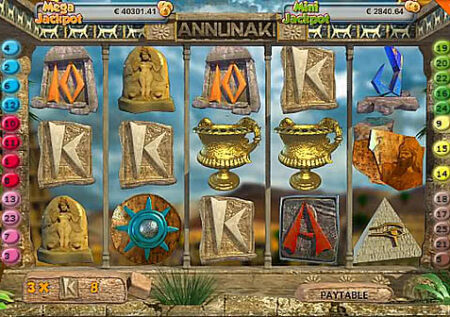 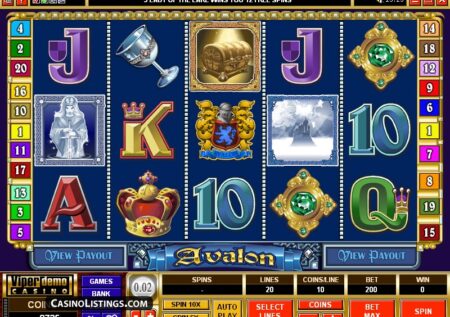 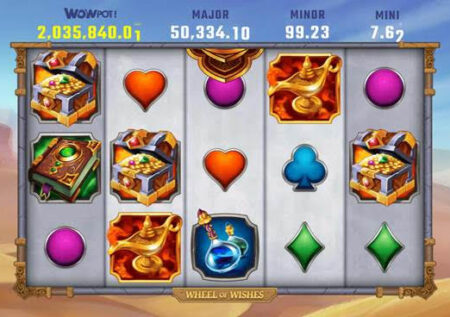