#5 The youngest and the most successful poker players

The last but not young poker player from our list is Charlie Carrel.

Charlie Carrel – $ 9.5 million Born in 1993
The talented Charlie Carrel was born in 1993 in the capital of Great Britain – London. As a teenager, he began to master and really became interested in online poker and in 2013 entered the PokerStars Sunday Scoop Super League. He is now one of the top 3 poker players in England.
But, after a while, Charlie decided to go into live poker. And it was an important, very correct decision. He found himself not only in the thick of things, but also in the center of attention – popularity was ensured by victories at events such as the EPT Monte Carlo and the Grosvenor Poker Tour (GPT). Mr. Carrel’s list of victories includes four well-deserved victories in the EPT tournaments, the English event Triton Poker London and one victory in the WPT series. 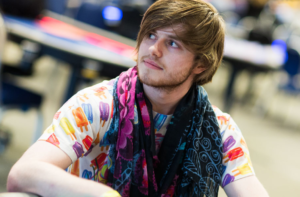 We see that for big wins, age sometimes doesn’t matter. Poker loves the smart, the stubborn and the brave. By the size of the prize money received by the participants of our top, it is clear that talent can help a person no less than a profession.

These young Fedor Holz, Dan Coleman, Jason Kuhn, Adrian Mateos and Charlie Carrel and promising poker players that have all the chances to become real poker legends and be included in the list of the richest players. But do not forget that the beautiful half of humanity also plays well complex games, and we will assure you of this by publishing later the material about the most beautiful and successful poker girls.