A couple of days ago, the “The Next Moneymaker” promotion ended at the Americas Cardroom poker room. This promo is timed to coincide with the transition of professional poker player Chris Moneymaker from PokerStars to ACR. Players were asked to go roughly the same path as the 2003 WSOP champion.

For three months, participants were selected through $0.01 tournaments. There were no prize money in them – only points for the leaderboard. As conceived by the authors, this should symbolize the selection of Chris through the satellite.

The final repeats the multi-day structure of the main, but with one difference – 100 players get there, and the prizes are intended only for the first place. The New Moneymaker gets a seat on Team Pro and prizes totaling $105,000 in cash and tickets to online and offline tournaments.

A Russian player under the nickname psycho29rus managed to go this way. He successfully passed to the final, where he was able to win and become the new Team Pro of the American room.

The final table for psycho29rus was not easy – he started with a middle stack and was close to relegation for a while, but the Russian still managed to break into heads-up with American McFloppity. The confrontation lasted about half an hour, until the final showdown occurred: 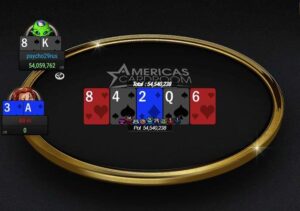 Commenting on the last hand, Chris Moneymaker and John Van Fleet were surprised at how the tournament ended. But a few hours later, the new Team Pro ACR member was announced on social media:

👑 Time to crown the Next Moneymaker! psycho29rus is our new sponsored pro and will represent #ACR both on and off the felt this year. Kudos and welcome to the #Moneymaker family! 🙌#NextMoneymaker #Poker #PokerPro #ACRPro @CMONEYMAKER pic.twitter.com/o0sd2wVjrO

The story is remarkable not only for the fact that the Russian-speaking player will represent the American poker room. “Psycho29rus” did indeed follow the path of Chris Moneymaker.

According to statistics from the Sharkscope website, the Russian started playing at ACR in 2019 and has played less than 500 tournaments. These are mainly low-cost events with buy-ins up to $5 and various freerolls. In two years, the largest winnings of a Russian-speaking player barely exceeded $200.

So he was able to join the stellar team that includes John Van Fleet, Chris Moneymaker and Vanessa Cade. It is not yet known what role the Russian will play in Team Pro.