What is preparing Microgaming for ICE London? We can expect more than only new slots

Home » What is preparing Microgaming for ICE London? We can expect more than only new slots
Casino News

ICE London is one of the most important conferences and exhibitions of the year in the gambling industry. That’s why the show, which takes place annually in the very center of London, takes the leader’s place in newspaper headlines in recent weeks. A major game provider such as Microgaming is eagerly awaiting the opportunity to present a number of exclusive new games at this unforgettable event that will take place at ExCel London on 4-6 February.

This year, Microgaming Company and nine independent casino gaming studios with which the company collaborates for constantly expansion of its capabilities and offers for million gamers all over the world, will demonstrate some of the most anticipated new releases.

In 2020 Microgaming plans to release more than 100 exclusive games and add more than 240 affiliate games to its platform. And during their presentation they will also speak about the games that they plan to present in the network of partner operators.

One of them is updated and rose from the ashes the successful Book of Oz slot machine with one of the most popular worlds in its gaming universe. But this time the release will have the name Sisters of Oz from Triple Edge Studios, which will have the updated progressive jackpot WowPot, filled with fantasies, magic and adventures. The game will be presented during the upcoming show.

London ICE members will also be able to take a look at Aurora Beast Hunter produced by Just For The Win, which will be released later this year. The heroine of the game, Aurora, is going to captivate players in the 90s, the years full of action, where they will get the opportunity to hunt the most ferocious animals in the world.

Throughout the year, Microgaming will update and expand its portfolio of branded content. For today the range of branded Microgaming slots consists of such slot machines as Jurassic World and Lara Croft Temples and Tombs. 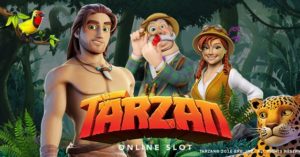 But of course Microgaming doesn’t forget about the games and characters we love. So we have good news for fans of Tarzan.  The license for the development of gambling about this fictional character is renewed. The company plans to release at least one more slot machine under the Tarzan brand.

Fortune Factory Studios, which collaborates only with Microgaming, is working out a new Tarzan game. Already now it is known that in the new machine Tarzan will be present on the screen throughout the game process. This slot will also be presented at ICE London 2020.